Bring food for potluck dinners and breakfast on Sunday.Â  Tari cooks gravy for the bisquits in the worlds largest skillet on Sunday morning.Â  Bring warm clothes, it is COLD up there this time of year.Â  It often rains and sometimes snows.Â  There areÂ  heated wall-tents for jamming and a big campfire to huddle around.

Well the 10th annual MRBA festival is behind us and it was a great success. We had a good turnout despite the great weather and the crowd stayed until the last band played their last song. As you all know the festival has two main purposes. The first is to get together and enjoy some great bluegrass music. The other is to raise money to support the activities of the association. We were very successful on both counts.

The bands who played throughout the day were great. The youngsters kicked off the festival and what a job they did. Some were polished performers and others were just getting started but they all played with enthusiasm.Â  Throughout the day, we were also able to enjoy several bluegrass styles and heard some old standards, some new songs and quite a few written by the performers themselves. I heard some comments that this festival was one the best so far.

There are some other people I and the board of directors want to thank by name. First is Mike and Tari Conroy who rounded up all musicians and did a hundred other things to make the festival happen. John and Lois Malikieâ€™s work started long before festival day. Their efforts were key to organizing the â€œbusinessâ€ end of things, getting the food ready and they worked tirelessly the day of the festival. Lela Shaffer, who is in charge of the merchandise, spent a lot of time getting together shirts, caps, bumper stickers and other items which promote the MRBA. She also worked tirelessly at the merchandise table on festival day. Raynae Redman organized the Kids in Bluegrass set. Forrest Clark, Mary Jane Cunningham, Roger Underwood and Kate McMahon worked the admissions and membership table throughout the day. Faun Treichel, John Redman and Mary Irwin worked in the kitchen. Iâ€™m sure there are other members who helped out but I failed to get their names. Thanks to them also. We even got great help from the folks in the audience who stacked all the chairs when the festival ended.

However, we could have used more volunteers in the kitchen and at the other tables. According to the old saying many hands make light work.

We have a lot of bluegrass events coming up on the calendar so I hope to see you at one down the road. 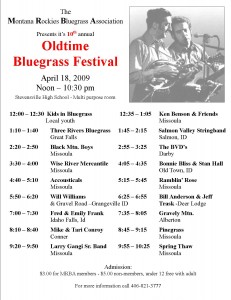 Volunteers
There are a couple of ways that you can help out.Â  Either bring a dessert dish or call Mike & Tari Conroy to volunteer to help at the festival.Â  (406) 821-3777.

FollowingÂ the show will head over to the American Legion toÂ  jamg late into the night and whereÂ overnight parking will be available.Â  Sunday morning, at 10am, there’sÂ free biscuits and gravy for everyone before they head home.Â  As in years past, people who would like to help by bringing food to the festival should bring desserts.

Saturday, April 12, 2008 marked our 9th year of getting together in the spring to perform. This years lineup:

All of the bands sounded great this year. We just keep getting better year after year.

We all headed over to the American Legion and jammed together into the wee hours of Sunday morning. Lots of folks stayed over and camped there. The jamming was great.

Here’s a little snipet of Rebecca in the kitchen that night (for some reason my camera doesn’t seem to pick up the bass, sorry)