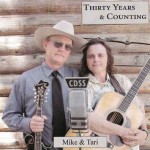 STEVENSVILLE – Home grown music at its finest is flat-picking its way into the Bitterroot this month, with the return of the Montana Rockies Bluegrass Association Oldtime Bluegrass Festival.

The festival will be held Saturday, April 18 in the Stevensville High School multi-purpose room. The music starts at noon and continues until 10:30 p.m.

Organized by the local bluegrass duo Mike and Tari Conroy of Conner, this yearâ€™s get together marks the festivalâ€™s 10th anniversary.

Weâ€™ve been in bluegrass a long time,â€ said Mike. â€œAbout 10 years ago we thought it would be fun to get together some of our friends – and everybody was real excited about doing it – so 10 years now weâ€™ve been doing it.

The musicians like it so much that, every year I put out an e-mail in the spring saying itâ€™s time to sign up bands, and within 24-hours Iâ€™ve got 18 bands signed up …. To come and play for free, thatâ€™s phenomenal.

We run 18 bands in 10 hours, so each band does a half-hour set. The first couple years it was kind of rough, but now weâ€™ve got this big clock that we set on the stage -Â said Mike
Itâ€™s just like clockwork.

The Conroys, who focus their repertoire on old, traditional tunes such as â€œIâ€™ll Fly Awayâ€ and â€œBury Me Beneath the Willow,â€ expect that folks will enjoy the range of bluegrass music on display at the festival.

We like the old-time bluegrass the best. To me, itâ€™s really primal. Itâ€™s just got this old, primal mountain sound. I guess thatâ€™s what drew us into it -Â said Mike.

For older people, a lot of them hear songs that they havenâ€™t heard since they were a kid, and itâ€™s pretty cool to see that hit somebodyâ€™s face when they go â€˜Oh! I remember that song,â€™ and see people singing with you,

Tari added -Â and at this festival you get [everything] from ours which is as old as we can play to some of the newer stuff and everything in between …. Itâ€™s good, clean, family kind of entertainment, so thatâ€™s nice.

The festival functions as the major annual fund raiser for the MRBA, which supports itself mainly through member dues.

Bluegrass is a real home grown music -Â said Mike.
Itâ€™s the kind of music that youâ€™d sit around the house and play, which is what all these guys do. So, if youâ€™re interested in, you know, banjo, guitar, fiddle, mandolin and that kind of stuff, this would be the place to come and see what itâ€™s all about.

Admission for the Oldtime Bluegrass Festival is $3 for MRBA members, $5 for non-members and free for children under 12 accompanied by an adult.

Later this summer, the Conroys will present a three-day festival at The Thomas Ranch south of Hamilton.

The HardTimes Bluegrass Festival will take place July 24-26 and will feature bands from Montana, Oregon, Washington, Wyoming and Idaho. On-site camping will be available.

For more information on these upcoming events, contact Mike and Tari Conroy at (406) 821-3777 or visit www.mtbluegrass.com.

Reporter Will Moss can be reached at 363-3300 or wmoss@ravallirepublic.com.