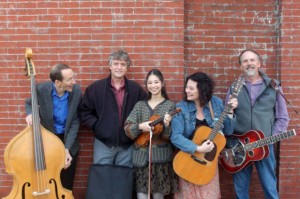 Tonight at the Top Hat

INFAMOUS STRING DUSTERS BIO
The Infamous Stringdusters are at the forefront of a new movement in bluegrass music. Their unmatched virtuosity has enabled them to take acoustic music to a completely new level. They wield an expansive repertoire touching on masters from Jimmy Martin to John Hartford, but their strength lies in their original compositions. Dedication to arrangements sets them apart and extended improvisation makes every performance completely unique. The live Stringdusters experience is anti-formulaic, groove friendly, and mind‐expanding ‐ not your granddaddy’s bluegrass. Unless your granddaddy was Jerry Garcia.

An Evening With
GREENSKY BLUEGRASS
www.greenskybluegrass.com

https://www.facebook.com/greenskybluegrassWEDNESDAY, OCTOBER 24, 2012
@ THE TOP HAT ~ 134 WEST FRONT STREET, MISSOULA
AGES: 21+
TICKETS: $12 adv / $15 dos
ADVANCE TICKETS GO ON-SALE FRI AUG 3 at 10AM MST AND WILL BE AVAILABLE AT EAR CANDY MUSIC AND ONLINE AT WWW.STONEFLY-PRODUCTIONS.COM. Tickets will also be available at the door on the night of show.

END_OF_DOCUMENT_TOKEN_TO_BE_REPLACED

This just in from “Roger’s Bluegrass”

Magic City Blues organizer Tim Goodridge made the announcement Monday. Krauss and Union Station will perform from 7 to 8:30 p.m., with opening acts to be announced later.

Roots rocker Chris Isaak is headlining the Friday night concert at Magic City Blues on Aug. 10. The Saturday night headline act will be announced on April 23.

Tickets go on sale May 18 at magcicityblues.com, Billings Holiday stations and Rimrock Mall. Tickets are $49 per night, $79 for a two-night combo or $119 to attend all three days of the event.

There is not a better bluegrass band today that Union Station.  Alison Krauss played the Alberta Bair theatre in the late ‘90s to a sellout crowd.  She had two big crossover hits that year and put on an outstanding show.  That was BEFORE she added Dan Tyminski and Jerry Douglas to the lineup.  Dan was the voice singing “Man of Constant Sorrow” to George Clooney’s lip syncing in “Oh, Brother, Where Art Thou.”  Jerry Douglas is just the best dobro player ever, period.  Ron Block is really an excellent musician as he doubles on banjo and guitar. This should be a great show.  When I was growing up during the 40’s and 50’s the South Park was one of Billings finest.  On weekends it was full of families having picnics, swimming, playing horseshoes and generally having fun.  The community band played concerts in the shell every Monday night during the summer.   I spent countless hours there playing baseball or football and in the pool.  It had the only skating rink in Billings during the winter.  Unfortunately it has developed an undeserved bad reputation due to drugs and gangs.  There is now a great Mexican festival and car show held there annually and bringing in top rated bluegrass will only help in restoring this park’s  great traditions. 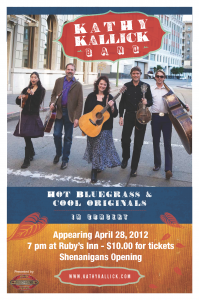 Leftover Salmon will play at the Wilma in Missoula tomorrow night.

Description:
Get you mid-week bluegrass fix with Erin Snyder at the Hangin Art Gallery in Arlee, where they’ll be passing the hat for the gal. 6–8 PM.

With New Country Blues (September 29th, SCI Fidelity Records), the Emmitt-Nershi Band has fully realized its potential. With Emmitt on mandolin & vocals, Nershi on acoustic guitar and vocals, Andy Thorn on banjo and Tyler Grant on bass. Dig it!

Where:  Missoula Winery and Event Center

Description:  Some people prefer pop music that behaves like math: once a few familiar variables have been determined—female vocals or male? Acoustic guitar or electric? — the end result should be easy to predict, and always sound
the same. That’s not the Joy Kills Sorrow method. This Boston-based string band favors a more unpredictable approach relying on musical chemistry and improvisation. Hence the title of their sophomore album, This Unknown Science. All of the members have been touted as virtuosos, and the early twenty-somethings effortlessly hunt for unexpected outcomes and new discoveries.