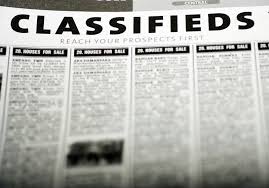 The Montana Rockies Bluegrass Association has a new web address. It is www.montanarockiesbluegrass.com. 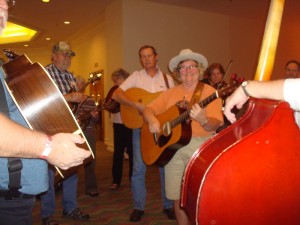 It was great to see founder and former MRBA president, Raynae Redman at the IBMA Convention this year.  Here she is having a blast in a great jam in the hallways of the host hotel.

On the strength of a busy touring schedule, a string of national television appearances and the release of a new album, Rare Bird Alert on Rounder Records, Steve Martin & The Steep Canyon Rangers took home the Entertainer of the Year award at the 22nd annual International Bluegrass Music Awards Thursday night, September 29 at Nashville’s Ryman Auditorium.  Martin, who always included banjo picking in his early stand-up comedy routines, has become more serious about recording and performing bluegrass music during the past two years, with the release of two albums of original music.

Martin and The Steep Canyon Rangers, a young group based in North Carolina named IBMA’s Emerging Artist of the Year in 2007, played “Me and Paul Revere” during the Awards Show—a song Martin wrote from the perspective of Revere’s horse and performed on national television at the Capitol 4th Concert in Washington, D.C. July 4. There’s always been something a little magic about fiddle and banjo music, and Martin’s deft clawhammer style underscored by Nicky Sanders’ exuberant fiddling and soaring three-part vocal harmony from the Rangers definitely did the trick.

Martin appeared at the microphone to receive the bluegrass music industry’s highest music award, leapt a few times into the air, congratulated the other Entertainer of the Year nominees and jokingly thanked them for losing. He went on to thank producers John McEuen and Tony Trischka as well as his band mates, and then he talked about how hard they’ve been working on their music, as well as the humor and entertainment aspects of their show, while trying to never denigrate the music. Martin said that while half of their audience usually comes to see him, not knowing anything about bluegrass, “They all leave loving it, and maybe they seek out other musicians. We’re really, really honored to win this award tonight.”

Steep Canyon Rangers lead singer, Woody Platt quipped, “Working with Steve, we might be the most entertained of all. Most of all we thank Steve for giving us this most amazing ride.”

…Read the rest of this article…

Congratulations to The Infamous Stringdusters on their 1st Grammy nomination! Here’s a shot of them from this year’s River City Roots Festival. 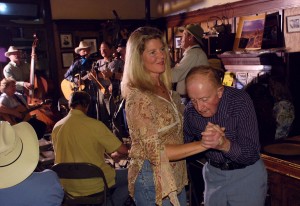 The “House of Fine Instruments” has 3 fine banjos in stock that were owned by well-known area players who were very active in MRBA and local music scene over the years.

These banjos are on our website, but we thought that we should point them out to those of you in our area bluegrass community who might not otherwise know they are for sale. 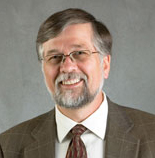 Great tips for jamming from Folkjam.org

by Charlie Hall and Robert Rosenburg, as printed in the January/February 2002 Folknik newsletter of the San Francisco Folk Music Club

THOU SHALT TUNE THY INSTRUMENT. There are too many good, cheap tuners around not to do this.

THOU SHALT LISTEN. If you can’t hear the lead instrument or vocalist, then consider yourself too loud.

THOU SHALT PASS. When handing off an instrumental solo, try to follow a pattern either clockwise or counter clockwise. If you want to skip the next solo or pass it on to the next picker, be sure that the next person is aware of the handoff. No one wants to start his or her solo in the middle of the song.

THOU SHALT WELCOME OTHERS. Open up the circle if others want to join. The jam can’t be too big if people are polite.

THOU SHALT SHARE IN THE SELECTION. Open the choice of songs to the pickers around the circle. Don’t monopolize the jam.

THOU SHALT TRY NEW STUFF. Once in a while a participant may suggest original material or one that is out of character with the jam. This is A-OK (refer to Jammandments #2 and #4).

THOU SHALT LET OTHERS KNOW WHEN YOU ARE NOT JAMMING.
Bands may sometimes be rehearsing and may need to exclude non-band members from jamming. If so, an explanation would be nice for the would be jammers.

THOU SHALT NOT RAID. Don’t interrupt an active jam by calling musicians away to begin another jam. (Bob’s note: Also don’t raid and take over a jam, by having your full band suddenly decide to sit in on a jam and end up playing all your own songs.)

THOU SHALT KEEPTH THY RHYTHM STEADYTH. Errors in rhythm are most difficult to overcome. Avoid adding or dropping beats. Play quietly if you can’t keep up and pay attention (refer to Jammandment #2).

THOU SHALT NOT SPEED. Do not start a song too fast for the others to play. Once everyone has had a turn at the lead, then one may announce that the temp is about to increase.

As you practice for next week’s jam at Ruby’s you might find it fun to check out our Playlists on the MRBA YouTube Channel.  These include a lot o the standards performed by the guys who made ’em standards.

To see the Playlists: